skip to main | skip to sidebar

While the Winter doesn't really affect us up here in Northern California where we have mostly sunny days....a lot of my Friends and Family are on the East Coast and six more weeks of winter doesn't sound like a whole lot of fun even though this year it seems like its been pretty light on the snow. In honor of Groundhog Day and hoping the little rodent wouldn't see his shadow....we had a silly morning with "Groundhog" pancakes!! I had seen these somewhere and knew it would be fun to make...My Kiddos had a good laugh!! 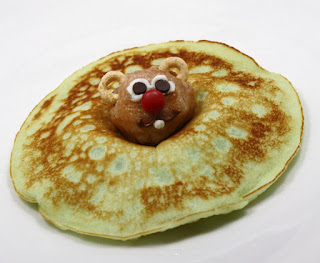 Did you know that there are about 23 or so Groundhogs around the US and Canada that are used on February 2 to predict whether or not there will be more six more weeks of winter?! Only three of them Punxsutawney Phil {Philadelphia}, Malverne Mel, {New York} and Balzac Bill, {Alberta} say six more weeks....all the rest like Staten Island Chuck, {New York}, Shubenacadie Sam, {Nova Scotia} and Wiarton Willie, {Ontario} all say Early Spring!!! That's quite a difference in favor of an Early Spring!! What do you think will really happen?

Posted by Colleen { HappyLittleArt } at 1:00 PM

Thank You So Much for Taking the Time to Leave Me a Comment!!! I appreciate them!! Have a Happy Kind of Day!! Colleen

All the designs, narratives & photographs on HappyLittleArt are ©2008-2015. Content shared on this site, should not be used, borrowed or published for any reason without written authorization. It is illegal & unethical for any unauthorized person or company to scan, copy, duplicate, manipulate, alter or reproduce in any way, my work without my permission.